A Short History of Camp Boiberik

Camp Boiberik was a secular Yiddish culture camp which existed from 1923 to 1979 near Rhinebeck, New York. (The camp site is now owned by the Omega Institute.) Camp Boiberik was a part of the Sholem Aleichem Folk Institute, a non-political Yiddish cultural organization with its center in New York and Sholem Aleichem Folk shuln (schools) in a number of states in the US. The director and guiding spirit for most of Camp Boiberik's existence was Leibush Leher (1887-1964), a leading Yiddish pedagogue, writer, philosopher and lyricist. Lehrer was director of Boiberik from 1923(?) to 1964, and he developed the key ceremonies of camp: "felker yontif", "mit-sezon", "kinder-tog", and the Friday night and Saturday morning services.

The first outing that led to Boiberik was conducted by the teacher Fayvl Holmshtok who took a group of Sholem Aleichem Folk Shul students out to the country for a few weeks in 1919. It should also be noted that Boiberik had a "guest side" where, for over fifty years, the leading Yiddish cultural writers, activists and supporters spent their summers.

The Idea and the Name of Boiberik
...Such an experiment was made a few years ago [1919]. Only ten children participated. The conditions were very rough. It was there that the children, probably ironically, gave the name Boiberik to the place, after the wealthy Yehupitzer vacation resort that Sholem Aleichem described. Nevertheless, the harmony and cooperation of the children and their general happines was such, that the idea of a "Boiberik" would not let go.

Boiberik - 1922
The same experiment this time with 50 kids and is so successful that the parents decide a permanant home is needed.

Boiberik - 1923
The former "Stratford Lake Camp" is bought for 29,000 dollars. It is located on Lake Stratford which is a mile wide and two miles long. When bought the camp possessed: (1) two houses and a dining room and kitchen, (2) bungalows, (3) bunks (tents) with double roofs and platforms, (4) an established water system [plumbing], (5) auditorium, (6) two tennis courts, (7) a baseball field, (8) a special "boardwalk" and a swimming place for smaller children, (9) 6 boats, (10) a special playing field for smaller children. Boiberik was bought in 1923, one week before camp started so that was apparently a rough summer since not everything was ready.

Boiberik - 1924
The Sholem Alecheim Folk Institute spent thousands to improve camp and "make it a model camp with which every Progressive could be proud". For this season, a dining room that seats 250 children, an auditorium for 300 people were built. An artesian well 211 feet deep and a reservoir of 11,000 gallons were dug. 129 children attended: 81 boys, 48 girls. Of those campers, 44 percent didn't know Yiddish. By the end of camp, only 4% didn't learn Yiddish.

Boiberik - 1925
In addition to new bunks etc, the guest side is established for the first time. Cultural activities are organized on their behalf. 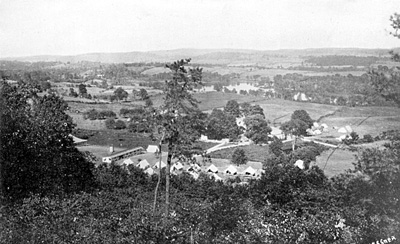 The view is from the "valdhoyz" hill looking down, with the lake in the distance. Campers lived in tents (foreground). Between the tents and the lake, there are a group of trees with two buildings among them. This is where the later guest office and canteen would be. In the early years these buildings (left by the earlier owners) served as a dining room and kitchen.
[This information from Peretz Kaminsky, camper in 1922, and 1923 and for several seasons more.] 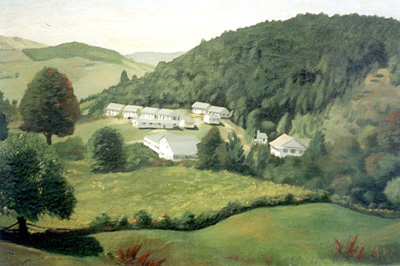 This painting by Nota Kozlowsky, a prominent artist in the Yiddish cultural world (and Boiberik arts and crafts teacher in the 1920s) was painted in approximately 1929. The view is from the guest side. It was donated at the 2001 reunion by Jerry Forman and his family. The two buildings in the left foreground are the dining room and kitchen. Tents have been replaced by wooden bunks. The second building from the right, I believe, is the pumphouse which still stands and is perhaps the oldest structure left in today's Boiberik/Omega.

I would appreciate any other identification of buildings in these two early panoramic views of Boiberik. Anyone who has later views of the entire camp (or most of the camp) is encouraged to scan them and send them to me. - Itzik Gottesman EE72 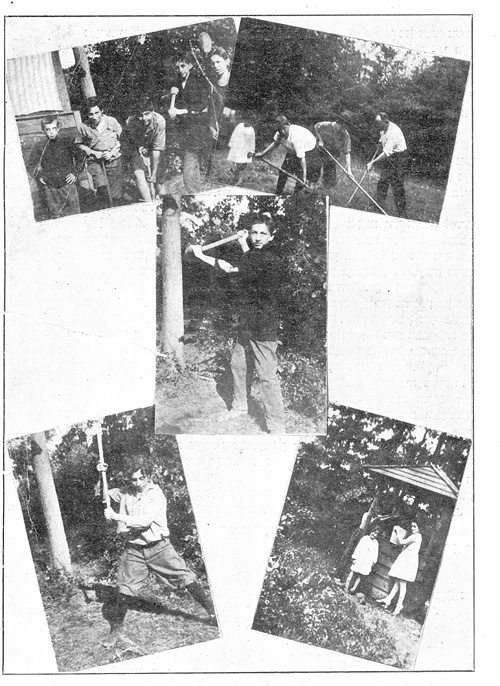 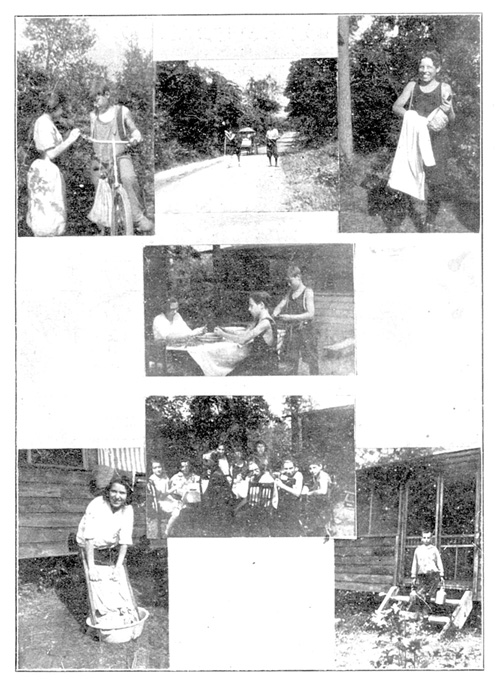 These two pages of photos comprise the earliest photos of Boiberik, 1918 or 1919. They were found on two torn pages from an unidentified early publication of the Sholem Aleichem Folk Institute from approximately 1918-1919 . They were donated by Naomi Neft, whose father died in 1988. The handwritten notes on the bottom of each page are in her father's handwriting. His captions read: "Scenes of 1st Boiberik in Berkly Heights, N.J., approx. 1918"

Naomi Neft writes: "My father, Bernie Silver (then called Barney) is the young fellow in the middle of the page swinging an ax. Since he was born in May 1905, it seems very possible that he was 13 in the photograph. I don't recognize any of the others, except the young man drying a pot (upper right, second page) could possibly be my father's friend, Jack Furman. If you can identify any of the others, please let me know."

On the back of one of the pages is found the following text about the first year of Boiberik (it seems to be the second half of a report by Shul 1 in the Bronx):
"...One more person remains whose accomplishments for Boiberik are quite large, if not the largest. This was the music teacher Miss B. Ehrlich. She dedicated the entire summer to Boiberik with her whole heart and soul, as if without Boiberik there would have been no summer. We would like to wish her what we wish ourselves, that for next summer, we should be able to take our entire shul to Boiberik. We hope that this will happen as a result of an idealistic endeavor, as Miss. Ehrlich showed us this summer. Our friend Mr. Malsman already promised us the necessary financial and moral support for this undertaking, and we are sure that he will not remain the only one."
[my translation from the yiddish - IG]

That is the end of the report on Boiberik. I will only add the names of the Farvaltung-rat (the Board), given at the end of the article:
Y. Zemel, A. Meyerov, B. Shidlov, Y. Kaminsky, M. Kotliar, H. Zacharin, P. or F. Lifshitz, F. Holmshtok, M. Gorelik.